Bob Geldof Stunned The Audience At The GQ Awards In London On Tuesday (08sep15) By Condemning George Osborne Over The U.k. Government's Response To The Syrian Refugee Crisis As He Went To Hand The Politician A Prize. 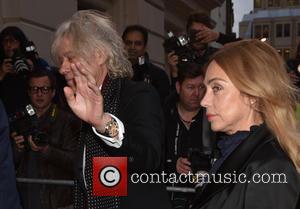 The veteran pop star attended the ceremony to present the Chancellor of the Exchequer with the magazine's Politician of the Year award, but he used the opportunity to criticise Osborne and the rest of the Conservative government for offering to take in 20,000 refugees from war torn Syria by 2020.

Before handing over the trophy, Geldof told Osborne, "I don't want to ambush you, George, I talked to you on the phone yesterday. But the government's response is inadequate. It can't be a numbers game. I don't know how that works out. It has to be a game of empathy and kindness."

Osborne appeared unperturbed by the outburst and instead went on to praise Geldof for his work tackling humanitarian crises, saying, "If anyone should be getting an award it's this guy... For my generation he is the one that ‎inspired us on international development..."

The refugee crisis in Europe has dominated headlines in recent weeks, and Geldof's public criticism of Osborne comes just days after the Live Aid founder offered to open up his home to take in displaced families.