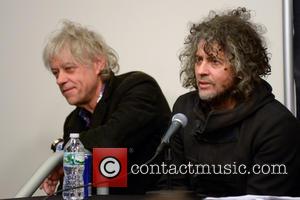 Veteran rocker Bob Geldof is to perform with The Boomtown Rats at a tiny pub venue in England as part of an annual cancer charity fundraiser.

The Rock Against Cancer event was launched two years ago by the residents of All Cannings, a village in Wiltshire, England which boasts a population of just 630, to raise money for a cancer charity and a local hospital.

The organisers have succeeded in persuading big names, including Brian May, Midge Ure and Dr. Feelgood, to perform at the tiny The Kings Arms pub, and now Geldof has joined the bill for the 2014 event with his reformed band The Boomtown Rats.

Steve Harley & Cockney Rebel and The Troggs are also on the line-up for the gig, which will take place outside the pub in May (14).