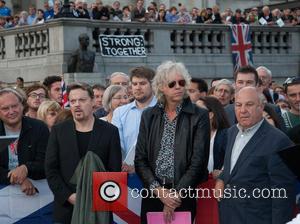 Irish rocker Bob Geldof led a rally in London on Monday (15Sep14) in a last-ditch effort to keep Scotland in the U.K. ahead of a crunch vote this week (beg14Sep14).

Scots will go to the polls on Thursday (18Sep14) to decide on the issue of independence, and Geldof waded into the debate by addressing a large crowd in the British capital's Trafalgar Square.

The Boomtown Rats star gave an emotional speech urging Scotland to stay in the union, telling the crowd, "Before there was a United States, before there was a United Nations... there was a United Kingdom... The United Kingdom is one of the greatest ideas for the modern age. Between the native genius of the Scots and the pure pragmatic drive of the English we made a world beater. The pity of this is that we are the closest of cousins - when one of our blood spills then it all spills. There is such thing as a big glorious no. No is not always a negative."

Comedian Eddie Izzard also spoke at the rally and urged Scotland to vote 'No', saying, "We thought it was important for (people) in Scotland to know what people outside feel about independence. It just seems too sad... to break up our family and build a border. It's Scotland's choice. We cannot say anything to you other than that we do care. You are part of the United Kingdom family and we'd love you to stay."