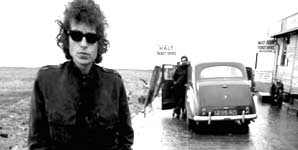 In an event that has brought together Bob Dylan and Martin Scorsese, NO DIRECTION HOME: BOB DYLAN, is the first time Dylan has participated in an exclusive film biography. This DVD covers his explosive arrival on the downtown New York City scene in 1961 - with a raspy voice, pounding guitar and stunning lyrics - through to his near-fatal motorcycle accident in Woodstock in 1966, no one had more of an impact and no one changed the landscape of contemporary music more profoundly.

Private, almost reclusive and disdainful of customary forms of publicity, Dylan has now agreed to make an appearance in his own story. Directed by Martin Scorsese, the intimate and incomparable film includes an archive of exclusive footage from childhood, from the road and from backstage, as well as unreleased interviews conducted over the past 15 years with other seminal figures from those times - some of whom, like Allen Ginsberg, are long dead.

Dylan, an eight time Grammy award winner, talks openly and extensively about this critical period in his career, detailing the journey from his hometown of Hibbing, Minnesota, to Greenwich Village, New York, where he became the centre of a musical and cultural upheaval, the effects of which are still felt today.

To celebrate the release of this amazing piece of musical history we are giving away copies of the DVD.
Click here to win No Direction Home: Bob Dylan