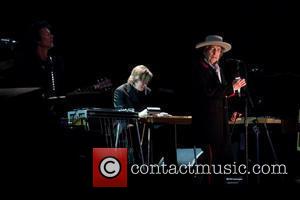 President Obama honored folk legend Bob Dylan and eleven other personalities for influencing the people of America with their words, songs and actions, in a ceremony at the White House on Tuesday (May 29, 2012).

Obama presented Dylan, the novelist Toni Morrison and others, with the Presidential Medal of Freedom award. In a speech, the President said of the award winners, "What sets these men and women apart is the incredible impact they have had on so many people - not in short, blinding bursts, but steadily, over the course of a lifetime". Others honored at the ceremony included political figures such as the Israeli President Shimon Peres, and lesser known individuals in public health and civil rights. Obama chose the honorees himself, and said of Dylan, ".I remember in college listening to Bob Dylan and my world opening up because he captured something about this country that was so vital.Everybody on this stage has marked my life in profound ways".

Before the ceremony had begun, a pianist had played Dylan's 1963 hit 'Don't Think Twice, It's Alright', and the musician drew warm applause when he arrived on-stage later in the evening. According to Reuters, the musician kept his sunglasses on and received his award "without showing emotion".