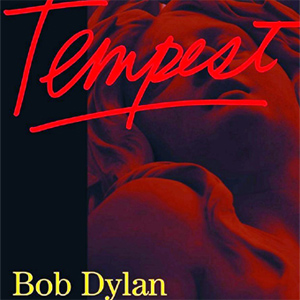 What more can be said about Bob Dylan's signature voice that hasn't been said before? His nicotine-stained bark has practically become a clich' of itself and, after 34 albums, on Tempest - his 35th - that old husk still sounds as unsullied as it always has. 35 albums in a career that has exceeded its 50 year mark, for most people that would spell the end of creative output and either retirement or a string of cover albums, however Dylan isn't most people, he never has been and never will be.

Tempest is actually one of the man's most creative and musically varied albums, not to mention it shows us that after all these years Dylan is still a master craftsman of powerful, emotive song writing. Here, Dylan continues exploring the basic themes he has been doing over the last decade on 2001's Love and Theft, 2006's Modern Times and 2009's Together Through Life - love, life and death. Particularly that last theme, death, Dylan seems most pervasive of, making this one of darkest albums to date, lyrically at least. At 71, maybe this is Dylan telling us what is playing on his mind now more than anything else.

On 'Tin Angel' Dylan sings of a three-way murder/suicide and on 'Long and Wasted Years' he sings: "I ain't seen my family in twenty years/ that ain't easy to understand/ they may be dead by now/ I lost track of them after they lost their lives." A sad but true reflection that we all share one thing in common; the steady inevitable encroachment of death and for him, perhaps, that time may be closer than he'd like to think. Dylan is definitely acting his age (hang your head in shame Jagger) and however morbid it may sound, he is singing of the one thing that perhaps concerns the older generation the most.

The album isn't all doom and gloom of course; as already mentioned, this is one of Dylan's most varied albums to date. Take the album opener, the jazzy, pre-rock and roll 'Duquesne Whistle' - a song about a steam-train whistle "blowing like she's never blowed before." He sums up so very eloquently how one simple sound - that of a steam whistle - can evoke so many images in a way that only he can do.

But back to the death, in particular the epic titular track about the sinking of the Titanic. Not since James Cameron turned it into a love story has one of the most catastrophic human disasters been treated so staggeringly. As well as mentioning Leonardo DiCaprio, he sings of passengers falling to their deaths into the deep icy waters, ("Dead bodies already floating/In the double-bottomed hull") and of men turning murderous in the face of disaster. Dylan has crafted one epic after another throughout his career, but none have conjured up such images of affliction and anguish.

Ending the album with an ode to his old friend John Lennon, on 'Roll On John' Dylan recalls the passing of his once close friend rather than singing the joys of the life he lived. His use of the 'Day In The Life' lyric "I heard the news today, oh, boy," may be a little late, but it still holds all the significance as it would have done had this song appeared on 1981's Shot of Love. A sad end to an overall sad album - sad, but very good.