Bob Dylan is working on his 35th studio album in Los Angeles, which will reportedly have a Latin American influence. 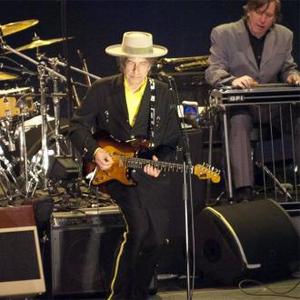 The 70-year-old singer is working on his 35th studio album in Los Angeles, and it will reportedly have a Latin American influence.

Los Lobos musician David Hidalgo - who has been producing Bob's latest record, and worked on his last two albums,'Together Through Life' and 'Christmas in the Heart' - said: ''It was a great experience. And different. Each one has been different, all completely different approaches.

''It's an amazing thing, how he keeps creativity. I don't see how he does it.''

David also detailed how he had introduced some Latin American instruments to the recording, such as the Tres guitar, a stringed instrument popular in Cuba and Puerto Rico.

'Christmas in the Heart' was released in 2009, and since then Bob has been involved in the 'The Lost Notebooks of Hank Williams' project, where artists recorded songs based on ideas and lyrics in notebooks left behind in a leather briefcase by the country artist after his death aged 29 in 1953. Bob recorded a track 'The Love That Faded' for the album, which was released in October last year.