Bob Dylan was presented with the Presidential Medal of Freedom yesterday (29.05.12), the highest civilian honour given in the US. 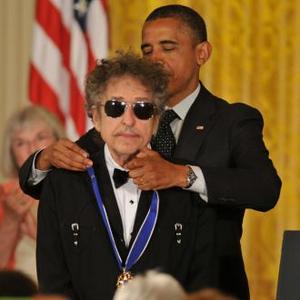 The legendary singer was among 13 recipients of America's highest civilian honour at the White House and President Barack Obama revealed himself to be a fan of the 71-year-old musician as he presented the medal.

He said: ''By the time he was 23, Bob's voice, with its weight, its unique, gravelly power was redefining not just what music sounded like, but the message it carried and how it made people feel. Today, everybody from Bruce Springsteen to U2 owes Bob a debt of gratitude. There is not a bigger giant in the history of American music.

''I remember, you know, in college listening to Bob Dylan and my world opening up because he captured something about this country that was so vital.''

The president chooses the recipients of the medal, which is awarded to people who have made major contributions to the security of the United States, world peace or culture, or have undertaken ''other significant public or private endeavours.''

It is not the first time the 'Times The Are a-Changin'' hitmaker has been honoured by a serving US president.

In 1997, President Bill Clinton named him a Kennedy Center honouree, while in 2010 President Obama awarded a National Medal of Arts to the singer.