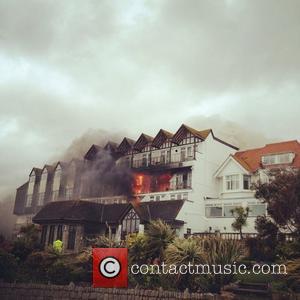 Blur cemented the anticipation building ahead of their special Olympic show at London's Hyde Park for the closing ceremony by debuting two new tracks at a special live show streamed on Twitter last night. One of the tracks played, 'Under The Westway', had previously been played by the group's front man Damon Albarn and Graham Coxon live earlier in the year, but this was the first time it had gone through a full band rendition, whilst the lo-fi electronica of 'Puritan' was a completely new cut never heard before.
The tracks mark the first new songs from the London-based four-piece since 2010's Record Store Day only 7" release 'Fool's Day', which itself was their first material since 2003's pre-hiatus album 'Think Tank'. The concert itself was seen by just 50 fans braving the London rain - those who'd found the secret location the group were playing - but was broadcast to millions on Twitter, reports the Bbc. It was the first time the group had performed together since their 2009 reunion tour that featured a Glastonbury headlining set.
There've still been no firm plans on what Blur will be doing after the Hyde Park show however, with various reports suggesting this will be their ultimate finale, and others suggesting that new material is on the way. What is concrete is that the four-piece have a trio of shows in August as a warm-up to London, the group playing Margate, Wolverhampton and Plymouth.