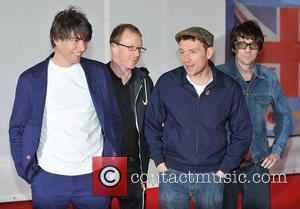 Blur were awarded the Outstanding Contribution to Music at the BRIT Awards last night and capped their acceptance with a five song greatest hits set that focused on the group's mid-to-late 90s boom period of success, when they achieved four UK chart topping albums in a row (adding a fifth with 2003's 'Think Tank.')

The Metro reports that the four-piece kicked off with 'Girls & Boys,' the track which earned them their first UK Top Five singles placing back in 1994, before playing the short, sharp shock of 'Song 2' from their self-titled 1997 LP. With the transmission on ITV1 finishing, it was a rather sped up version of 'Parklife,' featuring special guest Phil Daniels barking out the verse, before coverage continued on ITV2 with the band finishing with a typically euphoric version of 'Tender' - backed by the LONDON COMMUNITY GOSPEL CHOIR - and 'This Is A Low' from their album 'Parklife.'

The group caused some discontent however - albeit unintentionally -when, with time running out, the show's host James Corden was forced to cut short Adele's acceptance speech after winning the Best Album Of The Year in order for there to be enough time for Blur to perform. Earlier in the evening they'd accepted their award, with front man Damon Albarn stating "The last time we were here was 17 years ago and what happened on that night had a very profound effect on our lives."