The bassist for the group got the whole band in a heap of trouble after stuffing the Russian flag down his pants at a show in Ukraine.

American rock group The Bloodhound Gang are in trouble with Russian authorities after one of it's members, bassist 'Evil' Jared Hasselhoff, stuffed the Russian flag down his pants and pulled it back out of the other side during a show in Odessa, Ukraine. The flossing stunt was caught on camera and soon made it's way around the rest of the former Soviet territory as well as Russia, where an angry backlash against the band has formed.

The bassist told the crowd "Don't tell Putin" before wiping the flag on his groin and then throwing it into the crowd. After the stunt went viral, outraged Russian officials have attempted to get to the bottom (excuse the pun) of things, with Russia's state-run RIA Novosti news agency identifying Hasselhoff as the culprit and blacklisted the band from performing in the country again.

The group were due to perform in Russia over the weekend, with a planned slot at the Kubana music festival, held in a southern Russian territory Krasnodar Krai, being cancelled by the festival organisers and intervening politicians. Russian Culture Minister Vladimir Medinsky Tweeted on Friday (2 August); "Talked to Krasnodar territory leadership. Bloodhound Gang packing suitcases. These idiots won't perform in Kubana."

A member of the band's crew has since spoken to CNN about the band's arrival in Russia, where they were greeted with the news that they wouldn't be performing at the south Russia festival and a group of angry Russian protesters.

The source said that when they arrived at Anapa airport in Krasnodar Krai on Saturday (3 August), they were met by a group of Russian nationalists, who threw punches and kicks at the band as they made their way through the terminal, with some of the protesters even armed with whips. The band escaped without serious injury and were given a Russian police guard while they awaited a flight out of the country. 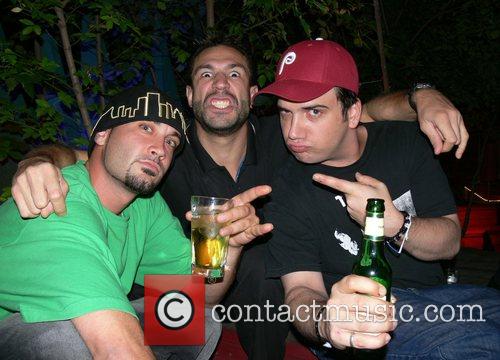