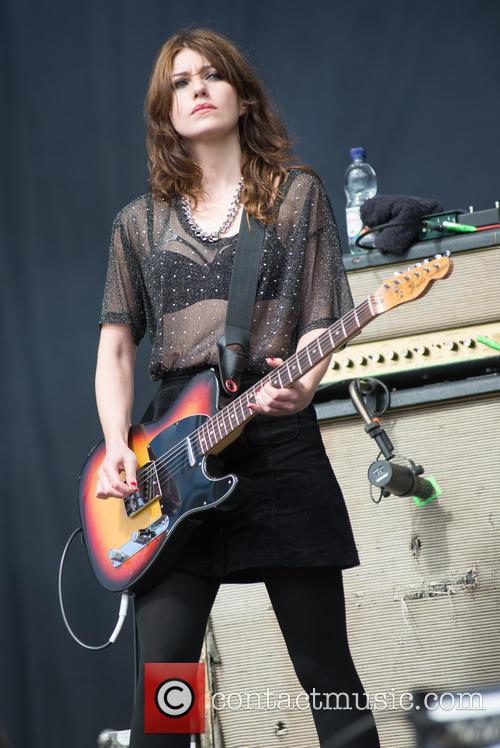 Hot on the trail of their third LP release at the start of last year, Blood Red Shoes have returned with new material in the form of EP 'The Water'. This Brighton duo have promised 'the most out-and-out rock riffs we've ever written' with these three tracks and from the very first listen, it's plain to see they weren't lying.

'Red River' storms in with aggressive riffs and determined drum beats and these are sustained at a heady pace for the three minute duration. The snarling guitar compliments yet contrasts perfectly with the vocals, with the heavier style highlighting joint-lead singer Laura-Mary Carter's harmonic tones. The riffs that open 'Black Distractions' could easily be mistaken for a Band of Skulls track, and when Steven Ansell joins in for vocal duties, the male-female shared vocals merely stands to affirm this comparison. However, this is where any similarities end as the overall sound is far dirtier and grungier. The short verses and instrumental bridges lead into extended choruses as the song is surged through with abrasive determination. Final track 'Idle Hands' has them displaying anything but, as the duo are hard at work thrashing out frenetic riffs and steadfast vocals. The pace is unrelenting and, even when the roar of guitars starts to fade out and you think the pair is taking a well-earned breather, they propel themselves back in, with even greater fervor and intensity than previously.

And as vehemently as it began, 'The Water' has run through before you know it. However, it's not without leaving its mark and this EP is a brilliant taster to Blood Red Shoes' passionate rock-driven sound. A previous fan or not, these three tracks will certainly leave you thirsty for more.

The first time I ever came across Blood Red Shoes was way back in 2007 when they toured alongside Maximo Park and whilst Maximo Park have vanished from my iPod since then, Blood Red Shoes are as ever present as they were as soon as I could download their existing material. Since then the boy/girl duo of Steven Ansell and Laura-Mary Carter have reached modest trans-Atlantic recognition, most notably with their inclusion on the Scott Pilgrim vs. the World soundtrack. Teaming up with co-producer and long-time friend Mike Crossey the duo have promised a much bolder and "ambitious" (according to Carter) release this time.

In Time To Voices is the third, and arguably best (so far) album from Brighton noisemakers Blood Red Shoes, who are currently in the midst of promoting the album through a string of dates across Europe. The band have long kept to their rigorous touring regime that has served them well for so long and when it came round to touring for the new album, they were hardly going to miss out too many places on one of their biggest tours to date. We managed to speak with half of the duo in the shape of the lovely Miss Laura-Mary Carter to see how the tour is going so far as well as delving into the band's past and possible future.

As 9 o'clock draws ever nearer, the crowd push ever closer to the front as the last few songs play over the stereo, a stage with a red backdrop, vintage television and lights scattered across the stage in-between amps and the drum kit starts to light up with a distinct red glow across it. The anticipation for Laura-Mary Carter and Steven Ansell to enter the stage grows with each passing second; once the sound of static from the TV increases more and more and the lights drop even further down the crowd know exactly what's coming next.

Brighton rock duo Blood Red Shoes are to release their second single 'Lost Kids' on May 14th with V2/Co-Operative Music Records (The Black Keys, Smoke Fairies). This is the second single from their new album 'In Time To Voices' which was released in March.

The first time I ever came across Blood Red Shoes was way back in 2007 when they toured alongside Maximo Park and whilst Maximo Park have vanished from my iPod since then, Blood Red Shoes are as ever present as they were as soon as I could download their existing material. Since then the boy/girl duo of Steven Ansell and Laura-Mary Carter have reached modest trans-Atlantic recognition, most notably with their inclusion on the Scott Pilgrim vs. the World soundtrack. Teaming up with co-producer and long-time friend Mike Crossey the duo have promised a much bolder and "ambitious" (according to Carter) release this time.

By Nima Baniamer in Music Reviews on 02 December 2010

Brighton-based band Blood Red Shoes have been working very hard recently. Already having released two albums, and toured over 12 countries, their real breakthrough was in 2008 with their debut album Box of Secrets. Light it up is the debut single off their second album, Fire Like this, and whilst having an energetic rift, the track fails to light anything up really.

By Nima Baniamer in Music Reviews on 19 August 2010

Brighton-based band Blood Red Shoes have been in the circuit for some time. Already having released two albums, and toured over 12 countries, their real breakthrough was in 2008 with their debut album Box of Secrets.

By Andrew Lockwood in Music Reviews on 05 May 2010

Brighton based duo with a "total fascination for the cello", but tired of White Stripes comparisons, release their 'difficult second' album. Blood Red Shoes follow up to 2008's debut, Box Of Secrets, finds the band slightly more polished and produced but lacking the promised Justin Timberlake influence! (I think Mr Ansell may have been jesting but you never know)

Having potently captured their live sound on their first album delivering a raw energy to the next was unlikely. The passion for the music is clearly still in evidence, manifesting itself throughout Fire Like This. The edgy and anxious feel to Box Of Secrets has been replaced with a maturity and collective cohesion derived from their extensive touring, attention to detail and their ever developing song writing skills.

Laura-Mary Carter and Steven Ansell describe their song writing techniques as "spontaneous" and "kinda like getting in a car and not steering it." It is with some degree of amazement then that such a package of fiery delights are set alight so brilliantly on their second album. The intensity within each tune has not been rubbed out by their more confident style of production. Mike Cassey, producer on both albums, and BRS, can both take credit for moving the sound forward without losing the very essence of the band.

Fire Like This opens with Blood Red Shoes going at break neck speed to belt out a tune more than worthy of 'Single Of The Week' over on NME radio. Play it twice and you can forget the similarity to Monster by The Automatic . The heady guitar work and frenzied drumming stop and start between wild alternations on vocal duty between Steven and Laura-Mary. (Apparently who sings what part isn't really decided "It's just whoever starts singing first, there's no real debate about it"). The first single, 'Light It Up', segues up next to bring proceedings to an early thunderous peak. The anthemic chorus and thumping beat deliver the albums equivalent to 'Doesn't Matter Much'. Where the band start to show their sonic evolution is on 'When We Wake', coincidentally, or not, Steven's favourite from the new material. The less shouty vocal, tempered guitar, subdued drums and melodic repetitive format suiting Laura's more sensitive side.

'Keeping It Close' ramps the pace right back up, just in case you were scarred they'd gone all soft. The songs structure does however highlight the slight shift in technique and is a clear example of the progressiveness of their new music. 'Count Me Out' sees Laura's vocals, not for the first time, go all Sonya Maden whilst two thirds of the way through she can be just about be forgiven for briefly resurrecting the sound of Big Country! 'Heartsink' sees some more fabulous fret work and taught drumming from the Sussex duo as they nail a sure crowd pleaser on the live set. 'Follow The Lines' is another venture into slightly unchartered, poppier, territory and even sees the introduction of strings set against a more reserved, over layered arrangement. Closing off is Laura-Mary's choice cut of the ten, 'Colours Fade'. Feedback and fuzz accompany a darker sound that perfectly partners the couples contrasting vocals.

Fire Like This is an accomplished follow up to Box Of Secrets. A more confident offering that sees Blood Red Shoes embark on some new musical directions as well as honing their formidable skill of writing punchy musical tornadoes. The energy is still within the band and the potency has not been tempered making the vibrancy of the tunes infectious.