Because they’re a band that so often gets pigeonholed as a ‘singles act’ – and, admittedly, their various best of collections are pretty heavenly objects – Blondie get unfairly overlooked when it comes to their albums. The one and only piece of evidence needed to overturn that reputation, however, is their third studio album Parallel Lines, released precisely four decades ago in September 1978.

Although they had been established as hit-makers in Britain and Europe for the previous 18 months, breaking through to the higher echelons of the UK singles chart with their hit ‘Denis’, Parallel Lines was the album that truly broke Blondie as global megastars.

Its wild success throughout 1979, following the release of several hit singles from it, allowed them to both gain serious traction from a rock press that was still sniffily focussed on long-players being the true acid test of artistry. Furthermore, Parallel Lines also gave them a proper profile in their native America for the first time, particularly after the trans-Atlantic chart-topping success of the immortal hit single ‘Heart of Glass’.

Essentially, the change in fortunes can in large part be explained by Blondie’s conscious shift in sound. Having framed their songs with an art-rock sensibility for their first two albums (1977’s Blondie and 1978’s Plastic Letters), something borne from their origins in New York’s punk crucible CBGB’s, this time around the group opted for a more pure-pop approach.

Under the aegis of a more professional guiding hand in the shape of Mike Chapman behind the production desk this time, sessions at the height of a sweltering New York summer in 1978 proved difficult, as Chapman felt the band had not been properly drilled in previous album sessions and weren’t professional enough for him.

However, the tough approach paid off.

From the explosive opening bars of electrostatic verve of new-wave opener ‘Hanging On The Telephone’, Parallel Lines wasn’t an album that was going to be ignored. “I’m in the phone booth, it’s the one across the hall,” Debbie Harry barked over a nagging riff in its opening seconds, “if you don’t answer, I’ll just ring it off the wall.” It may have been a cover of an obscure existing song, but Blondie truly take ownership of it.

From that point, Parallel Lines houses an almost unfair number of bona-fide ‘70s hits and Blondie’s most famous songs. The dramatic ‘One Way Or Another’, which has latterly become a signature of theirs after being covered by One Direction; the tender ‘Picture This’; the maddeningly infectious British chart-topper ‘Sunday Girl’… it’s a welter of treasures, but Blondie leave the best till near the end.

Resurrected from a demo they had long been trying to resolve into something recordable, the immortal indie-disco of ‘Heart of Glass’ may have been an absolutely torturous thing to create – with drummer Clem Burke apparently having to record every single beat separately – but the attention to detail shows. They suspected it might be a hit, but the band were astonished when ‘Heart of Glass’ flew to the top of the charts worldwide.

Even Parallel Lines’ weaker tracks are only by comparison to the incontrovertible strength of the album’s top tier of songs. The mid-album run of ‘I Know But I Don’t Know’, the tense synth stabs of ’11:59’ and another cover in ‘Will Anything Happen?’ would have served as perfectly good singles for Blondie’s range of impersonators that followed in the wake. The album’s closest thing to a ballad, ‘Fade Away And Radiate’, shows Harry making expert use of the song’s sparse structure. 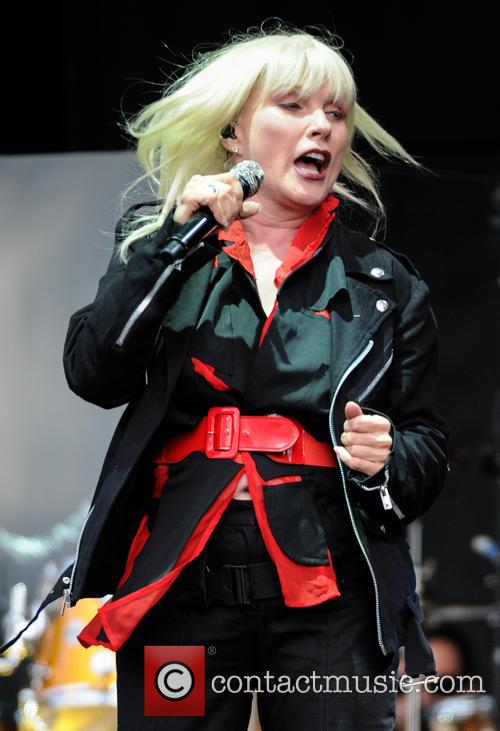 Debbie Harry performing with Blondie in 2014

Indeed, notwithstanding the bullet-proof songwriting from the band’s various members, mainly from the group’s core duo of Debbie Harry and Chris Stein, its Harry’s vocals that are really the star of the show on Parallel Lines. Ranging from a sultry, kittenish purr on new-wave love songs like ‘Picture This’ and ‘Pretty Baby’ to the sneer and fem-punk roar of ‘Just Go Away’ or ‘One Way Or Another’, it’s a masterclass that she delivers with cool authority.

Influencing other huge bands in the Noughties such as The Killers, Franz Ferdinand and The Strokes – who built in the album's cover art of skinny ties and Converses aesthetic when they crashed onto the scene with their debut album in 2001 – Parallel Lines was an instant classic, going on to sell nearly 25 million copies around the world and place Blondie in the firmament of global pop stars. Furthermore, Debbie Harry’s iconic image and attitude has informed 40 years’ worth of subsequent rock and pop frontwomen, from titans such as Madonna to Garbage’s Shirley Manson and Wolf Alice’s Ellie Rowsell.