Review of I Still Remember Single by Bloc Party 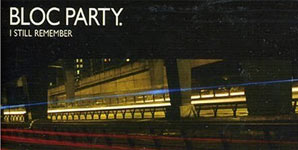 Along with Radiohead, Bloc Party are fast becoming one of the untouchables in modern day music as far as criticism is concerned, so I guess here is as good a place as anywhere to start.

'Silent Alarm' was always going to be a difficult record to follow, and while 'A Weekend In The City' does have its moments of undisputed magnificence, 'I Still Remember' isn't one of them.

Not that it's a bad record as such, but seemingly an odd choice of single too when the likes of 'Waiting For The 7:18' and 'Uniform' stand out so obviously in terms of radio friendliness and accessibility, but hey, what do I know?

Reminiscent of both U2 and Coldplay in equal parts, 'I Still Remember' may eventually be renowned as the moment where Bloc Party gatecrashed the dinner party circuit. Let's hope the food is stale and the beer is flat so they return to grimy indiesville almost immediately.