Bloc Party - A Weekend in the City Album Review

Review of A Weekend in the City Album by Bloc Party

Bloc Party
A Weekend in the City
Album Review 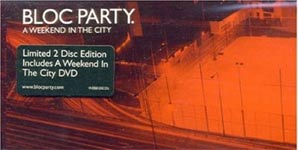 It's been about two years since the release of Silent Alarm, an interesting if rather one-dimensional affair that established East London's Bloc Party as the premier British indie-rock band. So naturally, the making of A Weekend in the City was always going to be fraught with pressure, and could potentially have seen the band fall on their faces. Fortunately, this isn't the case, and they've delivered a fuller record than their debut, that packs more of a sonic punch.

That's not to say that this is a complete departure, it isn't their Kid A, rather it is the same song structures as the ones on Silent Alarm but with some added bells and whistles.

Lead-off single "The Prayer" has a natural partner in "On", they're both druggy ventures into electro that still manage to maintain absolute clarity and focus. Elsewhere, there is evidence of an epic, Sigur Ros-esque tendency, "Kreuzberg" is a tender lullaby that builds to an ambitious climax with waves of shimmering guitar from Russell Lissack. Similarly, album closer SRXT shows the band have widescreen U2-sized aspirations with its explosive crescendo.

Lyrically, Kele Okereke is as serious as ever, leaving no room for humour or irony in his grand statements. "East London is a vampire" is a key line on opener "Song for Clay", putting the record firmly in a place, something the first record didn't really do with any vigour. This tendency towards harsh aphorisms can grate at times, but it is balanced by a new tender side to Okereke's lyrics, "Sunday" is particularly stirring, "I'll love you in the morning/When you're still hungover" is a lovely antidote to the macho, lad-rock making a scary comeback at the moment.

Probably most impressive though is the despondent "Where Is Home?" where our protagonist bemoans the "second generation blues" of young non-white British people. "In every headline we are reminded/That this is not home for us." Sadly, the tune doesn't live up to the content and its repetitiveness makes it one of the weakest tracks, which is a shame because it shows Okereke really expanding his lyrical oeuvre.

One of the strongest aspects of A Weekend in the City is the drumming. Matt Tong has perfect metronomic timing and is the reason the band sound so watertight, "Hunting for Witches" is an example of just how impressive a drummer he is.

A Weekend in the City is a natural progression for Bloc Party, which leaves plenty of places for them to go on their next album. One of Britain's most exciting bands just got better.