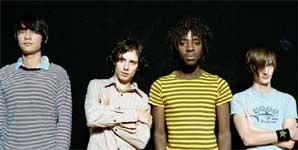 Mystery Jets are the first to brave the grandiose cavern of the Royal Albert Hall. Banging dustbin lids and whatever else seems to be handy, their rag tag style borders on yokelish prog. It sounds endearing and it is in parts, but just its hard to shake the feeling you're watching a contemporary version of Oliver Twist especially in these theatrical surroundings. Guitarist and Dad Henry Harrison has some Artful Dodger about him, in a nonsensical hippy kind of way leaving his lively band of urchins, led by tousled haired Blaine free to mischief. As they also live on Eel Pie Island, it's easy to let the imagination wander as much as the music. From the taunting chant of 'Zootime' to the melodic 'You can't fool me Dennis' the charm and appeal is definitely there but it's difficult to really 'get it'. Prone to bouts of indulgent noodling and guilty of incorporating too much into their songs, their eccentricity is both their appeal and their downfall. Intriguing? Certainly. Marks for use of kitchen utensils? Definitely. Will they take over the world? Probably not, unless Harrison Senior uses Eel Pie as an evil lair.

Biffy Clyro offer something a little more conventional even if it is Glaswegian scream mongering. With the Clyrites (Clyrotes?) out in sporadic force, headbanging, air instrumentation and lustily repetition of every lyric soon follows. Front man Simon Neil seems to have shed the 'early man' look and smartened up for the occasion and even stretches to a haircut. Regardless of aesthetics it hasn't made Biffy significantly quieter or any less neurotic. 'Glitter and Trauma' thuds and echoes with its usual force, whilst the itchy guitar and semi anthemic chorus of 'My Recovery Injection' and the power chord fuelled 'Some kind of wizard' give the die hards something to power their fists to and there's also a smattering of new material such as 'Semimental', 'Who's got a match' and 'A whole child ago'. The venue and the sobering occasion, leave them sounding distinctly, muted and removed from the frenzied sweatbox gigs they're accustomed to, nonetheless it's a commendable show of support for a worthy cause and thankfully the chairs remain firmly rooted to the floor. Mon the Biffy!

Roger Daltrey then takes centre stage as compere for the Teenage Cancer Trust and a short video showcase leaves this hack feeling severely guilty for ligging it in a VIP box, and a concentrated scrabble for lose change ensues. After highlighting the real reason for tonight, Roger Daltrey then introduces Bloc Party to rapturous reception.

Bloc Party need no introduction of course. It's a fitting headliner for a tonight's charity gathering as Kele and co. seem to take a lot of things pretty seriously. Starting the set with 'Waiting for the 7.18' a downbeat new number, bassist Gordon Moakes quips 'It's OK to dance' and Bloc Party before they launch another set brimming with nervous vigour and pensive deliberation. Despite a flat 'She's Hearing Voices' they blitz through 'Banquet', 'Two More Years' and 'Like Eating Glass' with Matt Tong's restless drumming consistently impressive. The new tracks in 'Hunting for witches', 'Uniform', 'Wet' and 'Blue Moon' carry on from the more tender moments of 'Silent Alarm' and despite embracing an increasingly darker sound, don't look lost amidst the established favourites. 'So Here We Are' saw Kele, bathed in white light jump onto an amp and survey the crowd with Chris Martin glee whilst 'Helicopter' confirms it's everything a single and a live show should be – vibrant, urgent and over all too quickly.

Returning for a four song encore, new track 'Blue Moon' has some unnervingly promising hallmarks. Despite the drumbeat akin to that of 'Sunday Bloody Sunday', it's another slow burning number and is the kind of track that will elevate them to the mammoth venues inhabited by the likes of Coldplay and U2. On a few occasions the general sound was left wanting but on sheer strength of music and confidence, Bloc Party were seemingly born ready for the big step. Closing on the outstanding 'Pioneers' it's when Kele delivers the line 'We promised the world we'd tame it' like no one else can that you're reminded just why Bloc Party are inimitable and for that reason alone, very, very special.