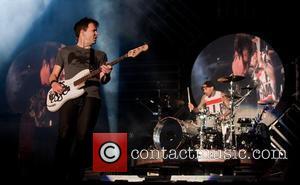 Blink-182 rocker Mark Hoppus is moving to London this summer (11) after spending years dreaming of living in the British capital.
The musician has often travelled to the U.K. to perform gigs and admits he has always wanted stay in the country for a longer amount of time.
After spending last Christmas (10) in London, Hoppus has decided to move his wife and eight-year-old son Jack to England from California.
He tells Britain's Kerrang! magazine, "Each time I've been to the U.K., I always want to move there. My family spent last Christmas in London for the whole Mary Poppins experience, and my wife and I finally decided that we were going to try it and go there for a year. We're planning on moving over there in the summer. We want to experience it for what it is and feel like locals."
Hoppus is already looking forward to being able to support his chosen British soccer team, Chelsea, when he becomes a London resident: "When I move there, I'm going to learn a lot more about their history and go to the games. I don't want to be a fairweather fan.
"The thing that sucks about watching football in the U.S. is that on the weekends, I have to get up at five in the morning to watch them play - now that's dedication."