Review of Four Album by Bleu

American thirty-something singer, songwriter and producer William James McAuley III, better known by his performing alias, Bleu, has worked on many musical projects over the past decade; writing for many artists as well as his own solo material. Four, Bleu's latest solo offering is at first inconsistent, but with perseverance, well-formed and likable, fuelled by much variety.

Opening track 'Singin' In Tongues' crashes in with driving energy led by a catchy and bright electric guitar and sax hook; a rock tinted power-pop mix oozing with perky, poppy energy, an infectious 'la la la' chorus and soulful saxophone licks gesturing throughout. The same energy gushes into hometown anthem 'B.O.S.T.O.N' which is driven by pushing, pulsing drums from the off, and twinkling glockenspiel giving a bright edge to the melody. Later in the track, a similarly catchy 'ooh' refrain is contrasted by rhythmic chanting of the word 'Boston' before, towards its close, a funeral like speech brings the track to a brief pause before it crashes back into its former energetic pop glory. 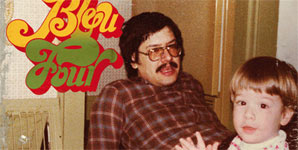 With a different, more down tempo and spacey feel, higher range vocals are more exposed during 'How Blue', with a fresh vibrato colouring longer notes. Also starting and ending with a string quartet passage, the track is flanked by quite jazzy, colourful string harmonies throughout. 'How Blue' is then totally contrasted by the driving rhythm of 'Dead In The Mornin'', which fades into upbeat, perky, horn-backed, pounding power-pop. With the exception of a brief contrasting, sombre-sounding section sandwiched in the middle of the track, the song is a kind of weird contradiction; bright and energetic but with lyrics about death. Catchy, foot-tapping and laden with soulful female backing vocals alongside brass and horn parts, the track sounds somewhere between Primal Scream's 'Rocks' and something from The Blues Brothers. 'In Love With My Lover' contrasts this again starting as a stripped down guitar and vocal track with a delicate, down tempo blues-folk feel. Just after the two minute mark, smooth low saxophone chords sooth alongside the guitar and vocals; the parts build gradually before a brief interjection of energetic pound, kicking back to the previously established alter ego and then dropping back to the gentle, stripped back feel a la Radiohead.

The second half of the album moves from something of a Robbie Williams or even Elton-like epic pop ballad type number, 'When The Shit Hits The Fan', with its' powerful harmonies and big sounding orchestral instrumental to 'Ya Catch More Flies With Honey Than Vinegar', which initially suggests a dance/electronic feel but then grows into a similar epic sound. Strange lyrics puzzle the grey-matter through both of the aforementioned; both with unusual, different words juxtaposed into a contrasting kind of epic sounding song establishing Bleu as a bit of a joker. There's also an odd chunk of laughter and speech at the end of 'I'll Know It When I See It' that sounds like the mad ramblings of Johnny Depp's portrayal of Willy Wonka!

To start with, Four's unpredictability is uncomfortable and fails to define any particular style, but as the album moves on, McAuley pulls musical elements together and brings the album to a contented conclusion with 'Everything Is Fine', a gentle stomping folk-y track with picked guitar, subtle percussion and glockenspiel, later flanked by the now familiar smooth strings and high vocal harmonies reminiscent of The Beatles.

A strange kind of theatrical, pop-rock blend oozes throughout Four, creating what starts as an unpredictable musical split-personality but, with perseverance grows into a catchy, well-formed and varied sound.