Blake Shelton Is The Man Of The Hour At CMA Awards 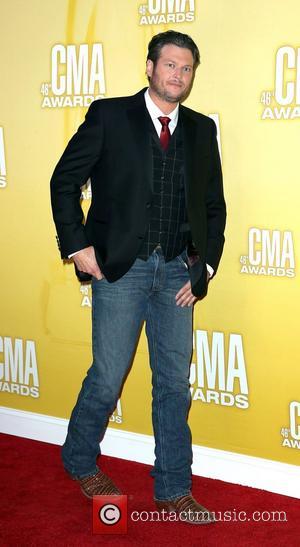 Blake Shelton went home after last nights (Nov 1) Country Music Awards with an impressive three trophies to add to his mantle, taking Entertainer of the Year, Male Vocalist and Song of the Year.

Shelton shared the honour of Best Song with his wife Miranda Lambert for their ballad ‘Over You’, with Lambert breaking down in tears on stage over their success. And as for Shelton’s Best Male Vocalist Award, it marked the third time in a row that the singer has received the coveted award.

As well as Shelton and Lambert, other winners on the night included Country legend Willie Nelson who was presented with a lifetime achievement award at the ceremony held in Nashville, Tennessee. Alabama quartet Little Big Town found double success as they collected the award for Vocal Group of the Year and Single of the Year for their song ‘Pontoon’. Eric Church took home Album of the Year for the smash hit Chief, whilst Toby Keith beat off competition to win Music Video of the Year for the novelty track, ‘Red Solo Cup’.

One of the biggest shocks of the night however was with Taylor Swift who, although performing on the night and being nominated for three awards, walked home empty handed at the end of the night. Don't worry, there’s always next year Taylor.