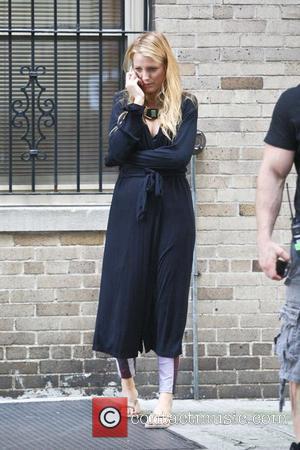 Picture: Blake Lively talks on her cell phone prior to filming a scene for her television series 'Gossip Girl' in the Upper East Side, Manhattan. New...

Following their secret wedding, Blake Lively and Ryan Reynolds have returned to work, with the former being snapped getting back onto the set of Gossip Girl, according to E! Online. Any hopes that there might be a picture of what sparkler Lively had been presented by Reynolds were sadly dashed, with photographers not managing to get close enough to the actress; however she did look happy, arriving to work in New York with a beaming smile across her face. The surprise wedding occurred on September 9, 2012 when, wearing a custom Marchesa gown by Georgina Chapman, Lively said "I do" to Reynolds, who looked equally dapper in a Burberry tuxedo. It wouldn't appear that the couple had a honeymoon of any great extravagance, with reports stating that they hung about in in Charleston for a few days instead. For actor Reynolds, he'll be hoping that he'll be lucky in love this time round after previous engagements haven't quite ended up turning out so well. He was engaged to singer Alanis Morissette in 2004, only for the two of them to mutually split three years later. After that he began dating Scarlett Johansson, with the pair even managing to get married in the Autumn of 2008. That ended in divorce in 2010 however, with Lively being his first relationship following that in 2011.