Blake Lively Swept Off Her Feet By Louboutin 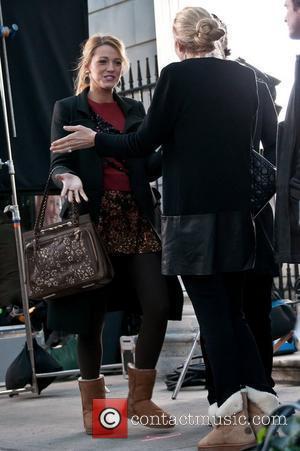 Blake Lively was quite literally swept off her feet by designer Christian Louboutin at a party in New York on Tuesday (1st November 2011). The Gossip Girl star was given the full Vip treatment by the designer, who named a pair of his stilettos 'The Blake' after the actress, reports the UK's Sun newspaper.
Dressed in a long red coat, Lively giggled as the shoemaker to the stars lifted her up and carried her across the floor to the delight of fellow partygoers. The designer was in high spirits while celebrating his book launch at Barneys, with the likes of Mary-Kate Olsen, Ashley Olsen and Tyrese Gibson. It's no secret that Lively is a huge fan of Christian, after claiming to own hundreds of pairs of heels. The unlikely duo have regularly been spotted partying and shopping together after first meeting on a fashion shoot for American Vogue while Blake was shooting Gossip Girl in Paris. The actress is allegedly dating the Hollywood star Ryan Reynolds, following her split from Leonardo Dicaprio earlier this year. Reynolds divorced from his former wife Scarlett Johansson last year.
She is currently shooting Oliver Stone's highly anticipated crime-drama Savages, about two marijuana growers who face off against the Mexican drug cartel who kidnapped their shared girlfriend. The movie hits cinemas on 28th September 2012.