Liverpool quintet Black Swans are to release their second single 'This Looks Like Yesterday' on August 5th 2012 taken from their debut album 'The Life We Chose'.

The accompanying video sees a lonely man who takes repeated face shot polaroids of himself throughout his day-to-day life and used to them to cover the walls of an empty room. But it's a story with a happy ending because he finds the girl of his dreams and now he doesn't have to be alone in his photographs. It's a slow but upbeat rock song made easy to listen to by the breathy vocals of the lead singer; it's pretty catchy too with its melodic guitar tunes necessary in any ballad. According to band co-founder Jamie Wright, 'The song was written about the monotony of the daily routine we were in as a band at the time. We were stuck in a static place where every day felt the same, but knew we were in a fight or flight position.'

Both founders, Jamie and Ade Crane, grew up amongst influences such as Suede, Blur, Oasis and The Stone Roses which have really helped them discover and fine-tune the sound of Black Swans. They look set to grab record sales from both the UK and the US this year with their upcoming debut. 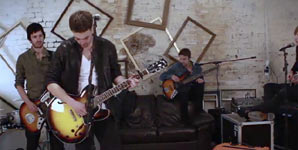