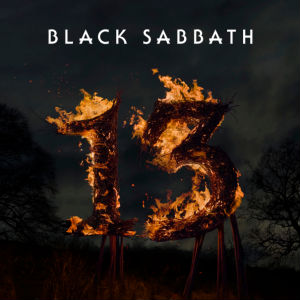 Black Sabbath's new album '13', their first studio album in 35 years featuring original members Ozzy Osbourne, Tony Iommi and Geezer Butler, is currently sitting at No.1 in the midweek charts setting them up for their first UK No.1 record in 43 years.

It was with their seminal album 'Paranoid' that the band scored their last UK No.1 album back in September 1970. The album was released the day before the first ever Glastonbury Festival was held, Edward Heath was residing at No.10 Downing Street and the tragic death of Jimi Hendrix was just about to hit the headlines.

"I can't believe Black Sabbath may have its first #1 album in 43 years." said Ozzy.

'13', produced by Rick Rubin and featuring Brad Wilk on drums, has seen rave reviews with the likes of the Metro heralding the album as a "triumphant comeback", Time Out calling it the band's "best album in decades" and Kerrang! describing the record as "brilliant, heavy and magical".

This December Black Sabbath will embark on a UK tour, kicking off at London's O2 Arena on December 10th, before taking in Belfast, Sheffield, Glasgow and Manchester followed by a return to where it all began with what is set to be an emotional homecoming show at Birmingham's LG Arena on December 20th.

The '13' track listing is as follows: