Review of Black Sabbath's self-titled album and Master Of Reality both re-issued as deluxe editions. 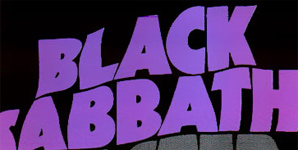 I've been listening to a lot of Black Sabbath lately to try and get back to a solid appreciation of timeless metal. In fact, if you've not had the Ozzy LP's out for a while, shake the dust off and slap one on, loud enough to shake granny's from their grave.

In my left hand I held Black Sabbath's self titled debut and in my right I held their third album 'Master of reality'. My whimsical mind decided to give 'Master of Reality' a spin first, which is a hellish collection of deep and bassy head shakers, forged in the fiery pits of Hades. The crusty sound created by the de-tuned guitars and bass was pioneered by guitarist Tony Iommi, who damaged his fingers in a factory accident a couple years previously and decided to take it easier on his digits by reducing the tension in the strings. The deep and gloomy effect has been mimicked by pretty much all grunge, stoner rock and metal bands since, but it was Sabbath who got it right.

Master of Reality may be regarded by some as a lazy album, whatever that means. but for those who have ears for it, you'll find layers of sound that resonate and create the atmosphere that is lacking in a shit load of other bands that I've paid money for. If you're into dark, doom filled imagery and want some heavy repetitive riffs to keep you entertained while driving like a maniac on some twisty roads, then this should certainly be added to your collection.

Since letting the Black Sabbath sound out of its case, it has been nibbling at my mind like a hungry bug inside an apple. The more the bug eats, the bigger it grows until the entire apple is gone and only the bug remains. The only way I could satiate the bug's desire to feast upon my sanity was to drink of the Sabbath cup once more. I threw on the debut album, and to my great relief, the gnawing inside my head subsided. I felt the thundercloud pass over the church yard, as those famous chords rose up from Tony Iommi's guitar and Ozzy Osbournes larynx uttered the eternal question 'What is this that stands before me?'

I don't think I've got the vocabulary to fully describe how songs like 'The wizard' or 'N.I.B', make me feel, these are songs that you have to let into your mind and pray that you like them, because they're never getting out again.

Black Sabbath.The title of the debut song, the debut album and the name of a band set to plague the earth with their presence. It all started on Friday 13th February, 1970 and still continues to this day. Black Sabbath have always been capable of pushing the subliminal mind fuck buttons inside my head, and I have to admit that I think the Ozzy years produced some of the most powerful and dramatic metal that these ears have heard.