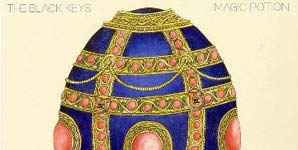 One man and his guitar, and a drummer with the stage presence and attack of Animal from the Muppets, The Black Keys have cool (and an analogue sound) that The White Stripes could only dream of. With that sound echoing the dirtiest blues you have ever heard and a funk that seems to target your gut rather than your head, the question was always whether the band would be one trick ponies.

Remarkably, they have kept it fresh way longer than The White Stripes did, despite sticking to the blues punk sound they first came up with (and keeping bass, or any other instrument, out of the mix). Magic Potion is the band's best studio album to date, pulling off the task of capturing the raw electricity that characterises their live sound, and throwing in some of the best songs the boys have penned.

This is real soul food throughout. Varying in pace, it stays hooked onto the pleasure button in your brain (or your groin) mercilessly. Anyone who has seen The Black Keys live has the music's visceral intensity burned into the memory - Magic Potion is the album that comes closest to that experience.