Review of Attack and Release Album by Black Keys 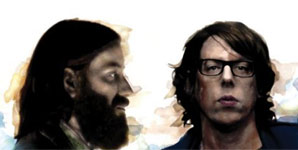 Black Keys are one of the genuine phenomena of the past few years - a band playing primal blues that captured mass attention for the way they have made not only a man with a guitar and a drummer into some kind of modern rival for early Zeppelin, but the way that they have made elemental music popular with people under 25. Many have wondered why they stick to the formula of guitar and drums, not bolstering with a bass and other instruments. Those people have usually not seen the band live, where that is the furthest question from anyone's mind.

However, here, Dan Auerbach and Patrick Carney have taken the opportunity from a project they were contributing to (backing a new Ike Turner album) to continue into a new Black Keys album with producer Danger Mouse. As is his wont, he has mixed the sound up, keeping their stark sound from and Thickfreakness and adding in some wonderful atmospherics to a more soulful sound. And added bass, and an occasional second guitarist (the fantastic Marc Ribot, famed for his work with Tom Waits). Black Keys purists don't know what to make of this luxury, but the fact is that the additions have produced a great sounding album, regardless of how 'Black Keys' it is. Auerbach's voice has rarely been recognised for its soulful blues quality, and that, together with the quality of the songs, makes this album work wonderfully.