Black Keys - Just Got To Be Single Review

Review of Just Got To Be Single by Black Keys

The Black Keys
Just Got To Be
Single Review 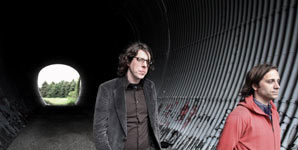 May the good Lord spare me from more drums/guitar duos. I've got nothing against them per se, but when it's a vehicle for lack of imagination rather than having a stab at something a bit different I tend to switch off.

Give The Black Keys a bassist and another guitar, and they'd be playing the kind of overdriven stoner blues that, say, Steppenwolf and Monster Magnet both churned out. I close my eyes and I picture bars in the middle of Nowhere, USA, filled with assorted hairy blokes in checked shirts and far too much denim nodding along with a kind of blissful approval at everything they hold dear (including their shotguns). There'll be coupla Harleys outside, but this ain't no drug-addled hippy trip. This is strictly piss-weak beer and maybe a fight before climbing into the pickup to get home-along.As one-paced as an ITV special with Robson Green, these two tracks blur by (and, significantly, into each other) in a kind of timewarped slow motion. Probably great if you're in Akron, OH, but the majority of us aren't, and could probably live without this plod across old, old, weary ground.