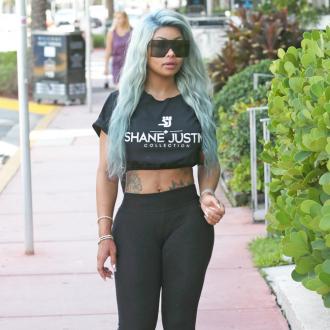 The 29-year-old reality star is embarking on a career as a rapper, but the star is fearful of the reception she may receive and she doesn't want people to think she is taking the business for ''granted.''

Speaking to XXLMag.com, she said: ''I'm an entrepreneur, I have a shop, I have Lashed, I have 88 Fin, I done did the TV scene. I done did all that so it's like, hey, Chyna, what's your next big thing?

''When I do drop my music, I just don't want it to be 'Okay, Chyna's taking this for granted' or 'She's not serious about this.' I want people to know I am serious. I want to show my progression and my growth.

''My fears going into this would be for people not to take me serious. I feel like that's like the normal human thing.''

But the television personality expects people to comment and critique her work when she releases new tracks.

However the 'Rob & Chyna' star simply wants her tracks to speak volumes.

She added: ''I just want to let the music speak for itself.''

However, Chyna has revealed she was torn between venturing into the music or film business.

She said: ''I told myself it's either two ways you could go with this. You either go music or you could do acting. And I'm like, 'uh, music. Hello!' I'm already around it and most of the people I already know them anyway, so, it should be really easy for me. I feel like if I do need help or if I need mentoring I could call my friends like French [Montana] and Nicki [Minaj] or just whoever for advice and whatnot. I feel like it's the right way to go.''