Bjork Stunned Fans At The Iceland Airwaves Festival On Friday (06nov15) After Pulling The Plug On A Headlining Performance At The Event Earlier This Year (15). 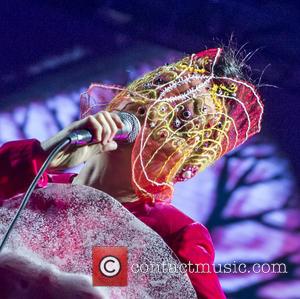 The 8 November (15) gig was scrapped when the Play Dead singer inexplicably cancelled the final dates of her 2015 tour, but she still showed up on Friday and staged a press conference to promote plans for a national park in her homeland's central highlands.

Protect the Park activists are hoping to keep the area green as government officials plan to build power plants and dams.

Wearing a floral-stocking mask and joined by environmentalist Andri Snaer Magnason, Bjork told reporters, "I would rather be at home writing songs."

In her opening statement, which was also written in English on a large piece of cardboard, the singer told the gathered media the government's plans to create up to 50 dams and multiple power plants could "end Iceland's wilderness in a few years."

She advised there is no time to lose as lawmakers and developers meet in 11 days to consider a proposal to construct a massive power cable through the highlands.

"I have decided to put all of my energy into Iceland," Bjork said. "I can be more valuable here and get more done than if I tried to fly around the world and fight global warming."

She did not talk about her decision to cancel her performance at Iceland Airwaves, but thanked the world's media for showing an interest in her homeland's environmental struggles.

The singer hosted a benefit concert in Reykjavik for the fledgling Protect the Park organisation last year (14), and performed with Patti Smith and Of Monsters and Men. The concert raised over $220,000 (GBP138,000) for the cause.