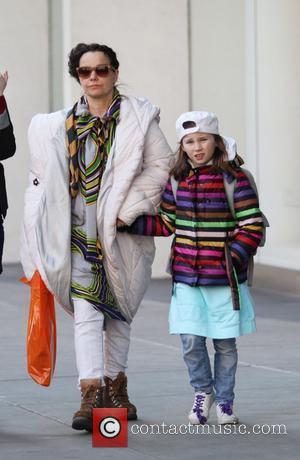 Icelandic pop star Bjork is aiming to be back on stage in mid-June (12) after cancelling a string of concerts due to ongoing vocal issues.
The singer, who released her latest album Biophilia last year (11), scrapped a trio of gigs in South America last month (Apr12) after doctors found a nodule on her vocal cords, and this week (begs07May12) she had to axe an additional few dates in Europe and Asia as she continued to recuperate.
Bjork took to her official website on Thursday (10May12) to apologise to her fans for the cancelled shows, but the star reveals she and her doctor are "pretty confident" her voice will be strong enough to make her live return with just a few more weeks' rest.
In a post online, she writes, "after 2 weeks of voice rest i went to my vocal doctor and she came to this conclusion: i need to rest for 6 more weeks . the good news is that we both feel pretty confident i can start singing fully healed in the middle of june...
"i am very sorry and embarrassed about having to cancel things and having promised things and then not being able to keep my word, truly breaks my heart. especially to people who have already bought tickets."
Bjork admits she took a risk by scheduling her new concerts with only a limited amount of time to rest in between, and her health soon took its toll as a result: "in the beginning of biophilia, we estimated that doing 3 residencies a year with couple of months between would be a rhythm my chords (sic) could take. then i got overexcited and when we threw the festivals into the mix and only leaving 2 weeks between new york shows and south america was too eager beaver... (sic)".
But the singer has some good news to share - her interactive Biophilia album has been adopted as a teaching tool in schools in her native Iceland and Argentina, and will soon be used in New York.
She adds, "it has a lot of fun sides like for example the educational angle: reykjavík's and buenos aires city school curriculums have now embraced biophilia educational program into their schools and we are partnering with the new york public library and the children's museum of manhattan to launch biophilia as learning resource for new york's children in july 2012."