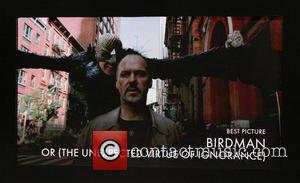 Birdman and The Grand Budapest Hotel were among the winners at the 2015 Costume Designers Guild Awards on Tuesday (17Feb15).

Other winners included Into the Woods, which landed the Excellence in Fantasy Film honour for Colleen Atwood's mystical costumes, and Tv show Game of Thrones, which earned a nod in the Outstanding Period/Fantasy Television Series category.

Patricia Arquette presented her Boyhood director Richard Linklater with the Distinguished Collaborator Award for his support of costume design over years, while Harrison Ford handed the Career Achievement Award to Aggie Guerard Rodgers, who designed the actor's outfits for films including Star Wars: Episode VI - Return of the Jedi and The Fugitive.

The ceremony was hosted by actress Emmy Rossum and also featured actress Naomi Watts, who was feted with the Lacoste Spotlight Award for her onscreen fashion sense.

The Wrap: 'Birdman' and 'Into the Woods' Win Costume Designers Guild Awards