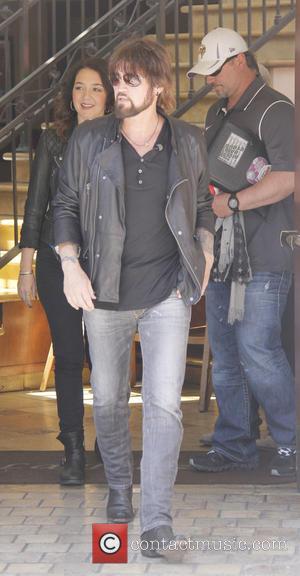 Billy Ray Cyrus and Brenda Lee paid their respects to George Jones at a private memorial in Nashville, Tennessee on Wednesday (01May13).

The 81-year-old country icon died in hospital on Friday (26Apr13), and his family organised a special service at the Woodlawn Memorial Park for his loved ones and fellow performers.

Lee, who toured with Jones when she was younger, was among the mourners, and she told Nashville's News Channel 5, "I was thinking the other day about a song he had out called Who's Going to Fill Their Shoes, and that's never more poignant than right now."

Singer Barbara Mandrell recalls, "He had such creativity. He always made everything he did so special and God just really blessed him," while fellow country star Joe Diffie adds, "He was the quintessential country singer. The cool thing about him was he didn't manufacture any of that. It was just so natural for him."

Cyrus took to his Twitter.com page after the memorial and poured out his grief as he referenced Jones' part in inspiring Jim Lauderdale's track The King of Broken Hearts.

He tweeted, "Just said goodbye to my friend George Jones. The King Of Broken Hearts... Just broke another one."

Jones' funeral will take place at Nashville's The Grand Ole Opry House on Thursday (02May13) and Kid Rock, Brad Paisley and Alan Jackson are among the acts who will perform during the service.