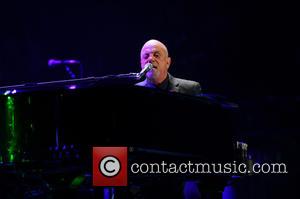 Billy Joel's singer daughter, Alexa Ray, has shrugged off rumours she has undergone drastic cosmetic surgery after she showed off a head-turning new look at a concert on Tuesday (01Apr14).

The 28-year-old daughter of the Piano Man and model Christie Brinkley kicked off her two-week residency at New York's Cafe Carlyle, and debuted a more mature look, prompting critics to suggest she has gone under the knife.

However, her representative denied the speculation to Us Weekly, saying, "Alexa has never had any plastic surgery other than a rhinoplasty, which she has admitted to. She's simply matured into a beautiful young woman."

The singer took to Instagram.com after the concert to show her gratitude to her fans for supporting her music career, writing, "Thank all of you for coming out to my first sold-out show... This showcase is my very own handmade love-letter to New York."

While her famous father also has a residency at the city's Madison Square Garden every month throughout 2014, Alexa's stint at Cafe Carlyle will only run until 12 April (14).