Idol Did The Wedding Singer For His Son 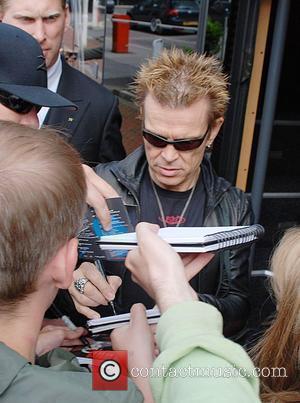 Picture: Billy Idol is mobbed by fans outside the Lowry Hotel ahead of his concert at the Manchester Apollo this evening Manchester, England - 30.07.08

Punk singer Billy Idol agreed to be in The Wedding Singer movie, because he would have to watch the film with his son anyway.

Idol, 49, would not normally have wanted to tarnish his hard rocker reputation, but decided it would thrill young WILLEM to see him in a film with his son's own idol, comedy actor Adam Sandler.

He says, "Like MTV, it was another way of getting through to young people but that wasn't the reason I did it. My son loved Adam Sandler and I thought: 'I'm going to have to see it anyway, so why not be in it?'

"It was a great 1980s spoof and I thought it was very funny - they had me at the Boy George impersonation. I gained a number of diehard teenage fans through doing it, who are adults now and are still turning up to my gigs."