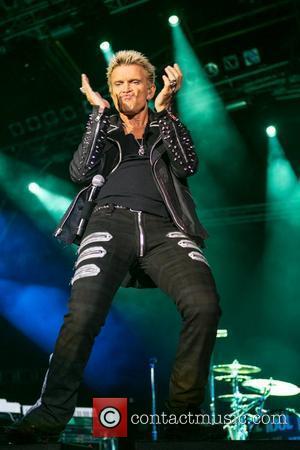 Picture: Billy Idol performing during the 3rd day of Festival Mares Vivas at Praia do Cabedelo in Gaia Porto, Portugal - 20.07.12

Rocker Billy Idol fulfilled his promise to perform at a fan's 26th birthday party on Friday (26Oct12), taking to the stage in a Seattle, Washington club for the special gig.

Michael Henrichsen launched a campaign to get the Rebel Yell hitmaker to perform for him and his pals as part of his 24th birthday celebrations in 2010, but Idol failed to show.

After continued calls for the star to perform for Henrichsen, Idol agreed to stage a concert for the birthday boy at the Showbox on Friday - and the fan was left overwhelmed at the one-off show.

Henrichsen was left fighting back tears as Idol pulled him onstage to sing a rendition of Happy Birthday, and he went on to perform his classic White Wedding for the crowd.