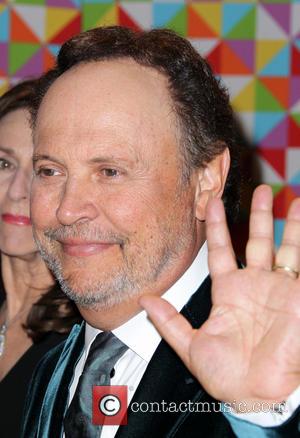 Billy Crystal reduced Whoopi Goldberg to tears on U.S. Tv on Friday (19Sep14) as they reminisced about their late friend Robin Williams.

The When Harry Met Sally actor was a guest on Goldberg's daytime talk show The View, and during his appearance, he recalled how he and Williams would spend hours on the phone to one another each of the four times the Ghost actress was selected to host the Oscars.

Crystal explained, "We were very protective of Whoopi. When you would host the Oscars and... Robin would be in San Francisco and I'd be in L.A... she'd do an opening, phone would ring. 'How do you think she's doing, boss?' and I was going, 'It was good, really strong opening; it was great'. Five minutes later you'd done your first intro (and he'd call again): 'What do you think?', (I'd reply), 'I think it was really good'.

"The whole show would be the two of us on the phone."

The touching tale brought tears to Goldberg's eyes and she struggled to regain her composure as she held Crystal's hand.

After wiping away her tears, the comedienne offered up her own recollections of working with her two old pals during the Comic Relief Usa charity shows, saying, "I would just sit and you didn't want to do anything, you'd just want to watch these fools."

She also recalled meeting Williams early on in her career at The Comedy Store in San Diego, California, where he promptly took Goldberg under his wing: "(He) babysat me and took care of me for as long as I can remember and we've aged together and grown up together... There was nothing that we couldn't do together."

Williams took his own life last month (Aug14) after a long battle with depression.