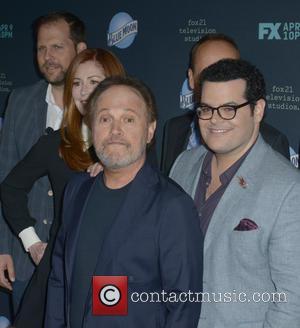 Picture: Billy Crystal and Josh Gad - A variety of stars were photographed as they arrived to the Premiere of FX's 'The Comedians' which was held...

The When Harry Met Sally star's garden fish pond has become a mecca for raccoons and coyotes desperate for water.

But it was a smelly skunk that really hammered home the funnyman's unwelcome visitors problem when he returned from a devastating Los Angeles Clippers play-off loss on Tuesday night (28Apr15).

He explains, "We're just exhausted from this game and feeling lousy... and apparently the skunk sprayed into the air conditioning unit behind the house and three o'clock in the morning, we wake up with this stink in the bedroom.

"We had a guy come... He showed us pictures, he caught these raccoons - we had, like, nine raccoons - and he trapped them and he releases them in the wilds of Malibu!"