"The shapeshifting thing, I honestly think he may have a brain tumor. He's always been insufferable."

The musician also dismissed Billy's recent claims that he has invited her to play with the band again since her departure, and insisted it was a "complete lie".

She added: "[Billy] has been telling people, 'Well [The Smashing Pumpkins] haven't played with [D'arcy] at all in 18 years.' Right dumbass, because then it wouldn't be a reunion!

"He says that he's invited me to come out and play for all of these things, which is a complete lie. He's never invited me to anything."

In a previous statement, the band argued that D'Arcy has "always deferred" when she was asked to reconnect.

The statement read: "In reuniting The Smashing Pumpkins, the band's dedication remains to its fans and its music. To that, James Iha, Jimmy Chamberlin and William Corgan haven't played a show with D'arcy Wretzky for over 18 years.

"But it's not for a lack of trying. For despite reports, Ms. Wretzky has repeatedly been invited out to play with the group, participate in demo sessions, or at the very least, meet face-to-face, and in each and every instance, she always deferred.

"We wish her all the best, and look forward to reconnecting with you all very soon." 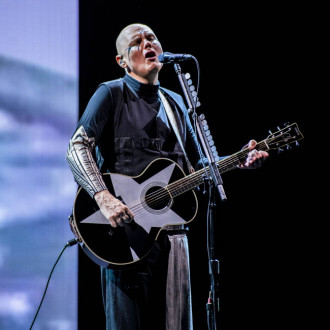