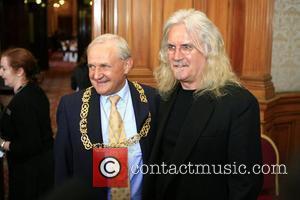 Picture: Billy Connolly, with Lord Provost Bob Winter, at the City Chambers to receive the Freedom of Glasgow Glasgow, Scotland - 20.08.10

Funnyman Billy Connolly has paid tribute to his friend and former singing partner Gerry Rafferty, hailing the late musician as "a true genius".
Rafferty joined the Scottish comedian's folk group the Humblebums before rising to fame in the 1970s with Stealers Wheel.
He passed away from liver failure on Tuesday (04Jan11) after a long battle with alcoholism, and Connolly has now spoken out to pay his respects to his pal.
He says, "Gerry Rafferty was a hugely talented songwriter and singer who will be greatly missed. I was privileged to have spent my formative years working with Gerry and there remained a strong bond of friendship between us that lasted until his untimely death.
"Gerry had extraordinary gifts and his premature passing deprives the world of a true genius."
Scottish singing duo The Proclaimers, who Rafferty worked with in his role as a producer in the 1980s, have also honoured the late musician.
They say, "He was exceptional when we worked together and very kind to us. As well as a great songwriter he was a really, really good singer with fantastic harmony ideas. The fact that as well as producing Letter From America, he sang backing harmonies on it meant a lot to us. A great guy, a fantastic songwriter, Gerry will be sorely missed and we are greatly saddened at the news."