Connolly: 'I Was Nearly Dr. Who' 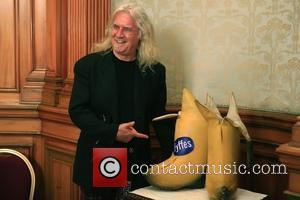 Picture: Billy Connolly at the City Chambers to receive the Freedom of Glasgow Glasgow, Scotland - 20.08.10

Outrageous Scottish comedian Billy Connolly has revealed he was once in the running to play timelord DR. WHO.
The funnyman, who starred alongside Jim Carrey in Lemony Snicket's A Series of Unfortunate Events and Tom Cruise in The Last Samurai, admits he had no idea his name was in the running at a secret meeting 15 years ago - and he evidently wasn't the man for the job.
The 67-year-old star tells British newspaper The Sun, "It was brought up in a meeting, apparently, but nobody told me until after they decided against it. I would have loved it. I'd have taken it."
The role in the 1996 TV movie eventually went to Withnail And I star Paul MCGann.