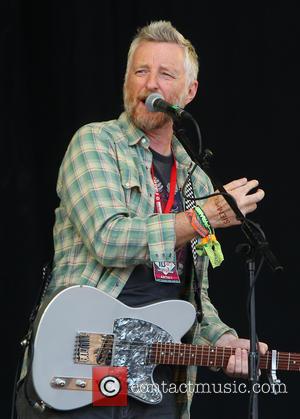 Rocker Billy Bragg is celebrating after successfully campaigning to overturn a ban on steel-strung guitars in U.K. prisons.

Bragg joined forces with fellow rockers Johnny Marr, Pink Floyd's Dave Gilmour, Radiohead's Ed O'Brien and Philip Selway, and Guy Garvey from Elbow earlier this year (14) as part of an initiative to urge officials to rethink the ruling, which was passed last November (13) as part of the government's changes to the judicial system, which also included new restrictions on books for prisoners.

In an open letter published in April (14), Bragg's all-star group argued that music had "an important role to play in engaging prisoners in the process of rehabilitation", adding, "This ability will be seriously undermined if inmates are unable to practise between group sessions."

Government officials have since agreed to reverse the ban and allow steel-strung guitars back in detention centres and Bragg, who founded the Jail Guitar Doors rehabilitation initiative to provide instruments for inmates, is glad authorities have seen sense.

He says, "As an incentive to engage in rehabilitation, individual access to steel strung guitars can really help the atmosphere on a prison wing. I've had a number of projects involving guitars on hold which now will be able to go ahead, and will allow those using music in prisons to get on with this important work."