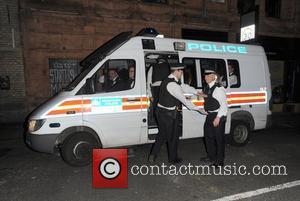 Picture: Police officers appeared to try and distract snappers while Billie Piper (not pictured) made an attempt to slip out unnoticed from the Almeida Theatre...

Billie Piper and Laurence Fox have introduced their new baby into the world, after the actress and former pop star gave birth to their new baby. Fox was so excited that he announced the name of the child on social networking site Twitter. Describing their new born son as "a little legend," Fox introduced their "new baba . called Eugene Pip Fox."
Fox and Piper endured nervous moments when having their first child, Winston, in 2008 after he was born via caesarean, with hospital staff fearing that he'd have run out of oxygen. However there were no such worries this time round and both mother and baby are fine. As well as Tweeting the name of the new arrival, they've also released pictures of the tot, as reported by the UK's Daily Mirror, showing his tiny feet and hands - the latter of which are clasped around just one finger of Fox's hand. At the time of the birth, Fox Tweeted "One born ever minute. We had our minute today. Couldn't be happier. Beautiful boy. Everything fine."
The birth caps a wish of Billie's that stretches back to when she had her first child with Fox; back then she'd said "I would like to have three children. I'm thinking of having two close together and leaving it a while, then having another. I had absolutely no idea how tiring being a mum was - or how hard mums have to work. I've worked some shitty hours in my life, but these are the toughest I've ever had." Just one to go!