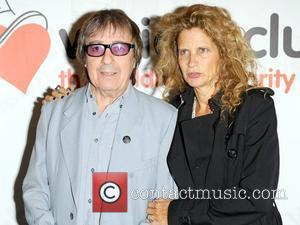 Bill Wyman has reteamed with THE Rolling Stones for a charity rendition of Bob Dylan's WATCHING THE RIVER FLOW.
The group hit the studio with pianist Ben Waters to record the track as part of a tribute album to late Stones star Ian Stewart, which will benefit the British Heart Foundation.
Boogie for Stu, which will be released in March (11), will also feature Charlie Watts, Ron Wood, Mick Jagger and Keith Richards on various tracks - Richards played guitar on three other tunes, while Jagger sings and plays harmonica on another track.
Waters, a friend of the late Stewart, has also recruited P.J. Harvey and Jools Holland to his supergroup for the album.