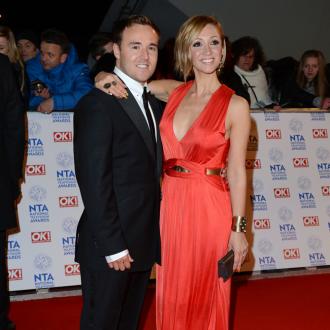 As Alan took to the stage to accept his award, he took a moment to remember Bill, who died last November after playing the role of Jack Duckworth for several decades

Alan held his award in the air and exclaimed: ''I love you pal.''

Speaking backstage to reporters he paid further tribute to his close friend and joked about what Bill might be doing now.

He mused: ''He'll be having a pint of Guinness for me. His wife asked me to wear his watch tonight so I've got it on. This is for him, he guided me literally from the start of my career at 'Coronation Street', he was such a huge, huge influence on my life like a second dad on screen.

''He'd be laughing at this right now, he used to say, 'none of that bloody acting'.''

Phil Collinson, the show's producer, also shared his respect for the late actor and described Bill as a ''stalwart'' member of the cast.

He said: ''This year we lost a stalwart of 'Coronation Street' who was just so much a part of everybody's life for a long time, Bill Tarmey, and so I think we'd love to dedicate this to Bill.''

Stars of the show jumped for joy as they were named Best Serial Drama and long-running star Bill Roache, who plays Ken Barlow, revealed how proud he is to be part of such a ''brilliant'' soap.

He said: ''Winning this award is down to the writers and the producers. How the writers come up with these storylines I don't know. They are brilliant. We have the great stories and we have the ability to portray those stories. We've got a great cast.''

'I'm A Celebrity... Get Me Out Of Here!' won Best Entertainment Programme, with Ant & Dec winning the top prize for Entertainment Presenter for the twelfth consecutive year.