Former US president Bill Clinton has filmed a cameo role in 'The Hangover 2' while in Thailand to give a speech about energy. 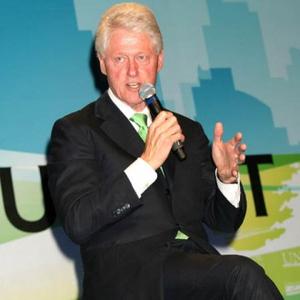 Bill Clinton is set to star in 'The Hangover 2'.

The former US president - whose wife Hillary Clinton is currently serving in the Obama administration - will play himself in the comedy movie, and has already shot the role in Thailand.

Extra security was provided on the set of the movie, which stars Bradley Cooper and Zach Galafianakis.

Bill, 64, was already in the Thai capital of Bangkok to deliver a speech about clean energy.

The first 'Hangover' film featured a cameo by boxer Mike Tyson, and it has previously been reported troubled star Mel Gibson would play a role in the new instalment, although he has since been replaced by Irish actor Liam Neeson as a Bangkok Tattoo artist.

Discussing the swapping of the actors, the film's director Todd Phillips said recently: "No one was ever fired. It's a term that's so obscene to me.

"Someone was doing me a favour to come in for a two-minute cameo, and we changed it. It wasn't like we fired somebody. Gibson was just doing a favour from the beginning."