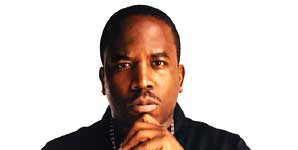 Big Boi is starting up his new label, Purple Ribbon, with a pair of releases before the year's end. First up is Got Purp, Vol. 2, a compilation featuring the label's talented roster. Check out the first single, "Kryptonite" below...

NEW YORK -- Big Boi, best-known as one-half of the hip-hop superduo OutKast, will release at least two albums this year on his Purple Ribbon custom label through Virgin, it was announced today. The first releases under the arrangement will include a new album by Top 3-charting Southern rapper Bubba Sparxxx, and a Purple Ribbon All-Stars compilation album that will be previewed by the bumping posse track "Kryptonite," from the Purple Ribbon All-Stars featuring Big Boi, Killer Mike, C-Bone and Rock D, as well as the ingenious and melodic electronic R&B dance tune "U Got Me" by Scar featuring Big Boi.

"Big Boi is a champion of creative daring," Virgin Chairman/CEO Matt Serletic commented. "His originality and ambition is obvious in the phenomenal ten-year trajectory of his band OutKast -- and in the atmosphere of freedom and out-of-the-box thinking that are his trademarks. All of his fans here at Virgin are delighted to work with him and be a part of his revolutionary musical vision."

Jermaine Dupri, President of Virgin's urban music, added, "I'm happy to have a situation where I can work with Big Boi. Not just because we're both from Atlanta, but because of his creativity, his musical ear and his ability to find new talent. His association with Virgin will add to the excitement that I'm bringing to the label."


Purple Ribbon founder Big Boi said: "I want to call Virgin home, and Purple Ribbon is the means for me to do that." Referring to his successful Atlanta-based dog breeding business, Big Boi explained the name of the label: "My 'Purple Ribbon' dogs have a strong blood line that goes back three generations. I want to put out potent funk music. Purple Ribbon is gonna be so strong you can smell it." Big Boi notes: "This is a Big Boi thang, not an OutKast thang. I'm doing films, but music is my first love."

The second release from the venture will be from southern MC Bubba Sparxxx. Bubba Sparxxx debuted at No. 3 on the Billboard Top 200 albums in 2001 with Dark Days, Bright Nights, driven by the ingenious radio and video hit, "Ugly." His upcoming Purple Ribbon/Virgin album, "The Charm," is scheduled for an October, 2005 release and is preceded by the hard, dirty south-style track "Hey!"

Big Boi (Antwan Patton) and Andre 3000 (Andre Benjamin) formed OutKast as Atlanta high-schoolers, signing their first recording contract just prior to graduating. From their first releases in 1994, the gold-certified single "Players' Ball," and the platinum-selling album Southernplayalisticadillacmuzik, OutKast's far-flung eclecticism and musical assurance set the act apart. Gradually taking charge of their own production, OutKast is one of the relatively few rap artists to grow in commercial success over a long series of albums, instead of peaking with their first release: their studio albums ATLiens (now double-platinum), Aquemini (double-platinum) and Stankonia (quadruple-platinum) all set successively higher sales records for the group.

OutKast topped themselves and the entire music industry with the unique double-solo album Speakerboxxx/The Love Below, which presented Big Boi and Andre 3000 as solo artists, packaged together as OutKast. In mid-2005, it remains the most recently-released album to attain the 10-million unit Diamond Award sales certification from the RIAA. The album held the Number One position on the Billboard Top 200 album sales chart for 3 weeks in 2003 and 2 additional weeks in 2004. The group has sold over 50 million albums worldwide.