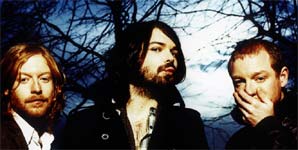 Biffy Clyro will release the single Saturday Superhouse on 5 March through 14th Floor Records. The first full single to be taken from their forthcoming album 'Puzzle' (to be released in May 2006), it will be released on CD and two 7" vinyls as well as all major download platforms, and will include the exclusive new tracks I'm Behind You, Scared of Lots of Everything and Miracle of Survival. The single follows the download-only release of 'semi-mental' on Christmas Day 2006.

Formed in 1999 by Simon Neil (vocals, guitar) and the brothers Ben (drums, vocals) and James Johnston (bass, vocals) in Ayrshire, near Glasgow, biffy clyro's debut album 'Blackened Sky' was released in 2002 and became one of the sleeper hits of the year. Follow-up 'The Vertigo of Bliss' followed in 2003 and was recorded in just one day, capturing the explosive energy of the live shows that keep fans coming back time after time, and makes their fanbase the most dedicated in the UK. The band's third album 'Infinity Land' was released in November 2004.

Recorded in Vancouver with veteran producer Garth Richardson (Rage Against The Machine, Kerbdog), mixed in New York by Andy Wallace (Nirvana, At The Drive-In) and with artwork by Storm Thurgusson (Pink Floyd, Muse), 'Puzzle' marks biffy clyro's transformation into a truly world-beating band. It also sees them anchor some of their most outlandish ideas with clear and crisp melodies, packing an emotional punch with 24-carat choruses shot through with biffy's trademark sideways approach to songwriting.

"We've always been very ambitious in the music we wanted to make," says Simon. "It was never just about guitars bass and drums, even though we're a three-piece. On our records we've always tried to use as much weird shit as possible."