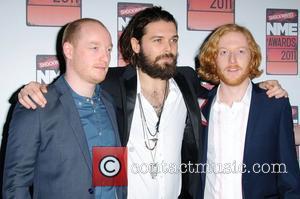 Biffy Clyro have, somewhat ambitiously, decided to opt for a double album release for their sixth studio album. The Scottish alt-rockers recently described the Opposites experience as “like climbing up Mount Biffymanjaro,” in an interview with NME. We’re hoping that this means they see it as a rewarding experience, rather than a death-defying and terribly gruelling one. The two discs are named separately: The Land At The End Of Our Toes and The Sand At The Core Of Our Bones. With 20 songs spread across the two discs, this is a ballsy approach from a band of Biffy Clyro’s stature.

Reviews suggest that – somewhat predictably – the quality control may have been overlooked in favour of adding out the two discs and that they have lost their edge, in favour of a more stadium-friendly sound. That’s not to say that the band are being shunned for their grand gesture, though; Opposites remains a sturdy effort and will go down well with Biffy’s ever-growing fan base.

Fleetwood Mac’s Rumours was the album that truly broke the band into the big time, back in 1977. A 3CD, 35th anniversary edition of the album is released this week (yeah, we’re a little bamboozled by the maths on this one), amidst the excitement and anticipation of the tour that the band will embark upon later this year. It was initially rumoured that the band would be playing Glastonbury Festival but that’s now looking like it won’t happen as they have American dates scheduled on the weekend of the festival.

This special edition release features the original album, with classic tracks such as ‘Don’t Stop’ and the painfully bitter break-up song ‘Go Your Own Way’ (the band were going through some well-documented personal struggles when the album was written and recorded). The second disc features live versions of the album’s tracks, as well as extras, such as ‘World Turning’ and ‘Monday Morning.’ Disc three is rife with the stuff of a Fleetwood Mac collector’s fantasies: demo recordings, early takes, acoustic versions and instrumentals. Think you’re a Fleetwood Mac fan? Think again. Not until you’ve purchased this definitive release of their breakthrough album.

Watch the video for Fleetwood Mac's 'Go Your Own Way' (Live)

Talking of acoustic versions, Justin Bieber has decided to release an acoustic version of his 2012 album Believe. Entitled, somewhat imaginatively, Believe Acoustic, the album also contains three new songs, just to make sure that fans are getting a little something more for their money, rather than simply the pared down versions of the tracks they already own.

One for the die-hard fans of course, the acoustic versions and rearrangements of the songs that Bieber fans are already familiar won’t be receiving quite the fanfare that the original album did and we very much doubt that it will prompt another celebratory tattoo from the teenage pop star (unless he fancied getting the words “cash cow” inked upon him somewhere.

Moving away from pop to classical, one of the world’s most famous tenor’s, Andrea Bocelli releases Passione. The album features vistors from the world of pop though; Bocelli duets with Nelly Furtado and Jennifer Lopez, lending the album a crossover appeal. Ever since 1999’ Sogno, Bocelli’s albums have been regular hitters in the UK Top 20 and there’s no reason why Passione should be any different. He’s one of the biggest selling classical singers and has an enduring appeal that never fails to translate into record sales.