The 63rd Grammy Awards saw history made; not once, not twice but three times with wins for Beyoncé, Billie Eilish and Taylor Swift setting new records.

On a night when barely anything was normal at the 63rd Grammy Awards, history was made as Beyoncé  not only won four awards but also became the most decorated female artist of all time with a collective 28 awards. Beyoncé  was reported to be a no show prior to the awards, much to the dismay of the organisers who had ideally wanted her to perform. However, as the evening got underway and the TV cameras panned across the room, it was something of a surprise to see both Beyoncé and Jay-Z seated at one of the socially distanced tables. Beyoncé was the big news, and the big winner on the night; her fourth award meant that she surpassed the total number of awards by a female artist, an honour previously held by Country singer Alison Krauss with 27. One of the biggest losers on the night, no doubt to the horror of Sir Elton John, was Phoebe Bridgers. Phoebe was up for four awards including Best New Artist and Best Rock Song, sadly she didn't win in any category. Elton, talking to Phoebe Bridgers on his Apple Music 1 'Rocket Hour' show ahead of the Grammy's, had said "If you don’t win at least one, I’m going to hit someone, OK?" We are yet to see whether he has! For now let's see who won what. 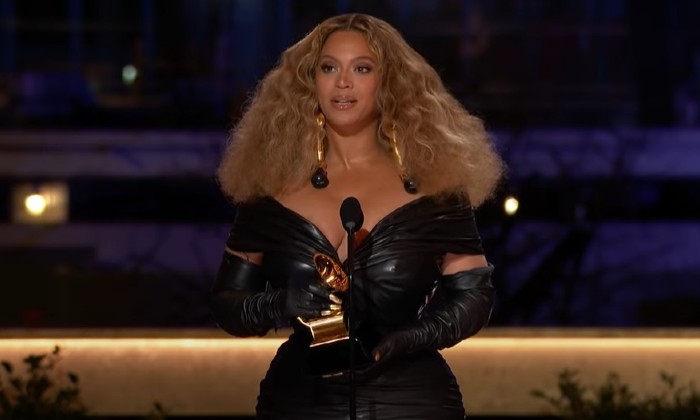 Beyoncé Knowles-Carter turned up, much to the relief of the Grammy Organisers, and looked every bit the star in her classy black evening dress. Beyoncé didn't perform but she didn't need to, a star of her stature can choose to say yes or no, with less pressure on her than some of the rising stars beside her. She walked away with awards for Best R&B Performance for her poignant protest song, The Black Parade, Best Music Video for Brown Skin Girl and best Rap Song and Best Rap Performance for her collaboration with Megan Thee Stallion Savage.

For the second year in a row Billie Eilish won the Best Record award, this time around for her song, Everything I Wanted. The 19 year old beat off stiff competition from Dua Lipa's Don't Start Now, Doja Cat's Say So, Beyoncé's Black Parade and notably Megan thee Stallion's Savage. Accepting the award Eilish said, "This is really embarrassing for me. Megan, girl, I was gonna write a speech about how you deserve this but then I was like, There’s no way they’re going to choose me. I was like, It's hers. You deserve this. You had a year that I think is un-stoppable. You are a queen, I want to cry thinking about how much I love you. You deserve everything in the world, I think about you constantly... You deserve it."

Taylor Swift had a phenomenal year by any reasonable expectations and could easily have walked away with an award for Best Album for either of her 2021 album's folklore or evermore. In the end Taylor Swift, wearing a matching floral dress and mask, walked away with best album for her stunning, multi-ward winning album, folklore. Taylor's win in this category also set a record as she became a three time winner, the first woman to do so, equalling the accomplishment only previously achieved by Frank Sinatra, Stevie Wonder and Paul Simon.

Beating Beyoncé, Dua Lipa, Roddy Ricch, Billie Eilish, Post Malone and Taylor Swift is no mean feat but that's just what H.E.R. managed to do when she won the Song Of The Year award for, I Can't Breathe. She said of the song, written in the wake of George Floyd's tragic death, "I mean, it's been the soundtrack to a movement, you know, one of many songs and I'm just happy to be a part of history now."

Much to the delight of many of the artists present on the night, as well as her ever growing fan base, Hot Girl Meg, Megan Thee Stallion, received the award for Best New Artist. She was also a joint winner with Beyoncé for Best Rap Song and Best Rap Performance for Savage. Megan put on a typically raucous show as she took to the stage to perform her mega-hit WAP with fellow rapper Cardi B.

The ever charming and charismatic ex One Direction star Harry Styles not only opened the show in style (no pun intended) but also beat the likes of Doja Cat and Justin Bieber to take home the award for Best Solo Performance with his ridiculously infectious song, Watermelon Sugar High.

Lady Gaga and Ariana Grande won Best Pop Duo/Group Performance  for Rain On Me, beating BTS, Nas won Best Rap Album for King's Disease, Anderson .Paak won Best Melodic Rap Performance for Lockdown and Fiona Apple picked up two awards, one for Best Alternative Album for Fetch The Bolt Cutters and one for Best Rock Performance for Shameika. Best Country Duo/Group Performance went to Dan + Shay & Justin Bieber for 10,000 Hours. The Weekend was obviously biggest act not to win as he was not even nominated and has now decided he will boycott any future Grammy Awards. His exclusion is one that has provoked a whole new conversation around how the awards are determined. He said, "because of the secret committees" he will now not let his record label submit his music for consideration. A sad state of affairs on a night that should be a celebration of music.