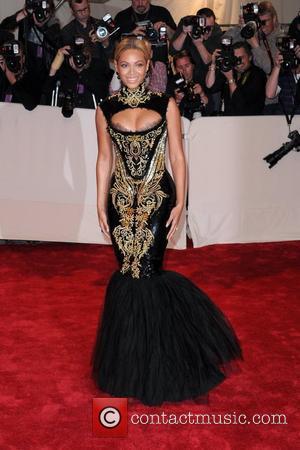 Beyonce premiered her highly anticipated new video for 'Run the World (Girls)' during American Idol last night (18th May 2011). Beyonce's 'Run the World' video has since taken the web by storm, with fans of the R&B star already claiming it to be superior to the classic clips for 'Single Ladies' and 'Crazy in Love', reports Billboard.
The Francis Lawrence-directed video sees Beyonce negotiating her way through an apocalyptic world while leading an army of dedicated supporters. The music video was originally scheduled to premiere on Vevo last Friday (13th May 2011) but the R&B star decided to debut the clip on Wednesday's American Idol instead. 'Run the World (Girls)' which features a sample of Major Lazer's 'Pon De Floor', has been produced by Switch, with additional production from Beyonce and Shea Taylor. The track is the first single from Beyonce's highly anticipated fourth studio album 'Four'. Speaking about her "edgier" new sound, the singer said, "It's definitely riskier than something a bit more.simple. I just heard the track and loved that it was so different. It felt a bit African, a bit electronic and futuristic".
Beyonce is set to be honoured with the 'Billboard Millennium Award' at the Billboard Music Awards on 22nd May 2011. The awards ceremony will also feature performances by Rihanna, Black Eyed Peas, Nicki Minaj and LADY ANTEBELLUM.